Stories of Survival in Appalachia and Wales 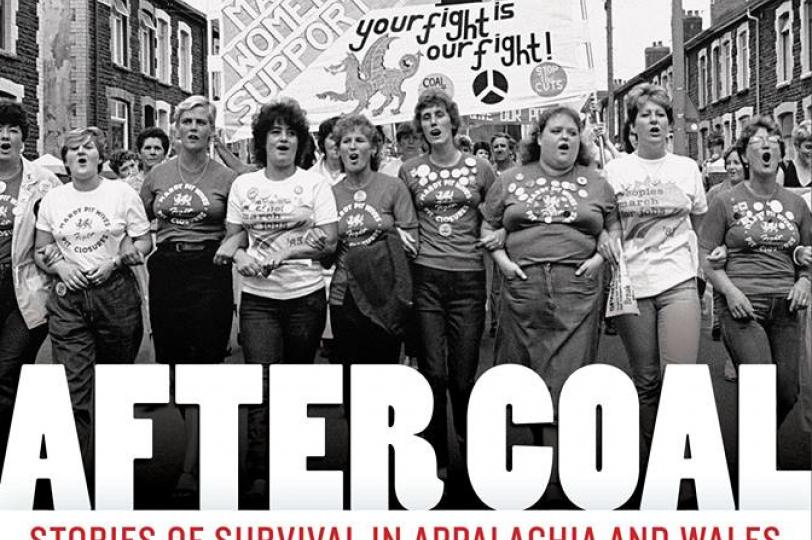 A companion volume to Hansell’s 2016 documentary film of the same name, After Coal focuses on coalfield residents in Central Appalachia and South Wales who chose not to leave, but remained in their communities and worked to build a diverse and sustainable economy after coal’s decline. After Coal tells the story of four decades of exchange between two mining communities on opposite sides of the Atlantic, and profiles individuals and organizations that are undertaking the critical work of regeneration. Hansell’s work approaches the transition from coal as an opportunity for marginalized people around the world to work toward safer and more egalitarian futures.

After screening a short section from his film After Coal, Hansell will be joined by Elizabeth Catte and Mary Anne Hitt in a discussion of his new book and the transition of communities away from coal. An exciting contribution to the evening will be a performance by Higher Ground in Harlan County. Afterwards, Tom Hansell will be available to sign the book.

Tom Hansell is an award-winning documentary filmmaker whose work has been broadcast on public television and screened at international film festivals. Hansell has more than two decades of experience working with coalfield residents to create collaborative media projects. He began his career at the Appalshop media arts center, and he currently teaches at Appalachian State University.

Elizabeth Catte is a public historian and writer based in the Shenandoah Valley, Virginia. She is the author of What You Are Getting Wrong About Appalachia, and co-owner of Passel, a socially-conscious historical consulting firm.

Mary Anne Hitt is Director of Sierra Club’s National Coal Campaign which works to eliminate coal pollution, stop climate disruption and repower the nation with clean energy. Previously, she served as the executive director of Appalachian Voices, an organization that brings people together to solve the environmental problems in Central and Southern Appalachia.

This event is organized in a collaboration between West Virginia University Press, Teaching for Change, Higher Ground in Harlan County, and the Heinrich Böll Stiftung North America.

The event will be followed by a reception.