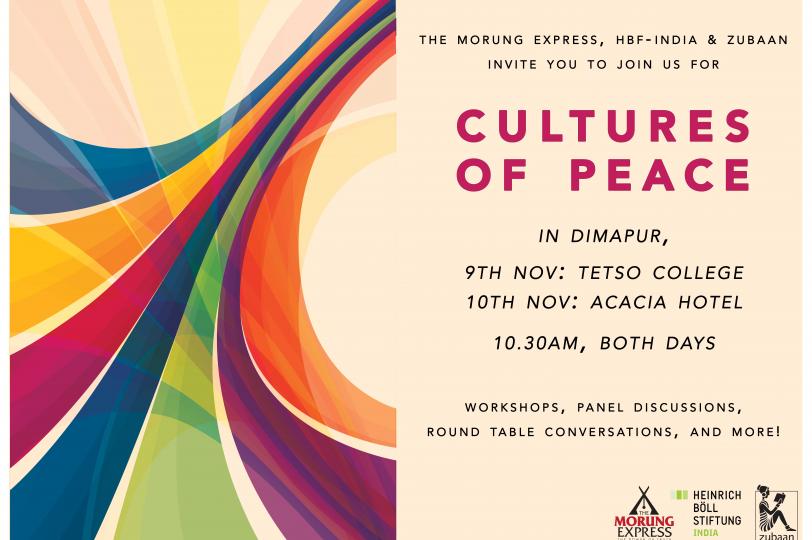 Part of the series
Cultures of Peace

The northeastern region of India, made up of eight states (Arunachal Pradesh, Assam, Manipur, Meghalaya, Mizoram, Nagaland, Sikkim and Tripura), is perceived today as a sort of outlier, an area on the periphery of the nation and one which has for long been a theatre of conflict, and violence. It is also a region which is militarized, with some states and some areas within states being under the control of the Indian army, which has extra legal powers. The people of northeastern states, because they differ racially and ethnically from ‘mainland’ Indians, are often perceived in the rest of the country as ‘foreigners’. These separations are further amplified by mainstream media and culture in the country, which does not represent, either in its entertainment or in its news / journalistic ventures, the interests, concerns and cultures of these eight states.

The purpose of the Cultures of Peace festival is to create an intervention in this state of affairs by highlighting the very thing that mainstream media is missing. Through the festival programme, it hopes to bring the peoples and cultures of the Northeast to the attention of the general public in the rest of India, and indeed to bring the northeastern states closer to each other — a lack of infrastructure in transport and communications, as a result of governmental in differences, means that there is often very little communication between people within these states as well. The main idea behind this venture is that cultural exchanges are a way to build peace, and also go a long way in breaking down the boundaries between ‘self’ and ‘other’ — or in this case, between the ‘mainland’ Indian mainstream, and the more alienated Northeast.

The festival is envisaged as a series of panel discussions and a workshop around the themes of Peace and how writing and culture contribute to creating an atmosphere that is conducive to peace. In addition we will also have a photo exhibition.