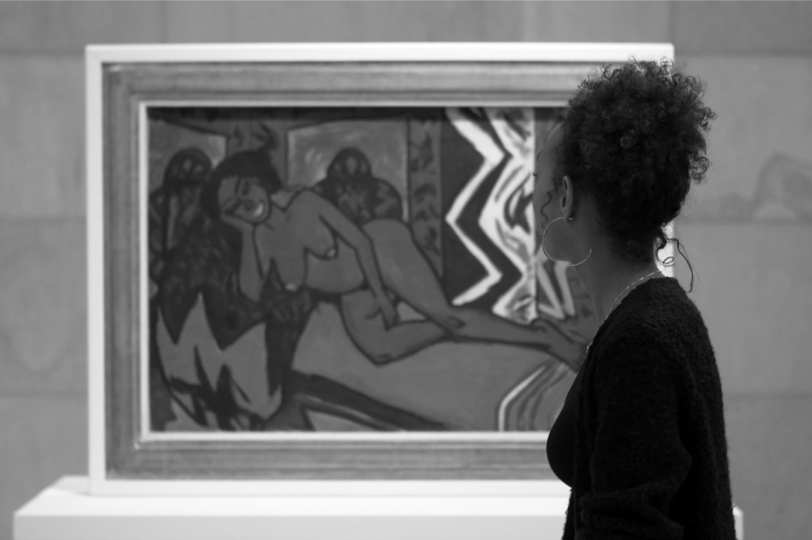 Language
In the original with English subtitles

In 1911, at the height of German colonialism, the renowned German artist Ernst Ludwig Kirchner painted Sleeping Milli: a portrait of a black woman lying naked on a divan. Kirchner’s painting is part of a long tradition in German expressionism in which white male artists eroticize and exoticize black women. In the film, Director Natasha A. Kelly seeks to “awaken” Milli, guiding the viewer to connect Milli’s reality to that of black female artists in Germany today. In interviews with the director, eight black German artists describe their efforts to overcome enduring colonial stereotypes and shape their own identities as black women within white German society. In the end, art reveals itself not only as the underlying architecture of the film, but also as the basis for the social and political activism of the film’s protagonists. In German with English subtitles. 2018, Germany, 45 Minutes.

Natasha A. Kelly is a writer, curator and  scholar-activist.  Her work combines theory and practice to draw connections between art, academia and society. She is artistic director of the theater series, “May Sisters,” in honor of the Ghanaian-German poet May Ayim. Her debut film, Milli’s Awakening (Millis Erwachen), premiered at the 76th Berlin Biennale in 2018 and has since been exhibited at the Museum for Modern Art in Frankfurt. Kelly is a visiting fellow of the Transatlantic Partnership on Memory & Democracy at the University of Virginia.

The film will be shown at Vinegar Hill Theater.

The screening will be introduced by the director. It will be followed by a Q&A moderated by Kwame Edwin Otu, Assistant Professor at the Carter G Woodson Institute for African American and African Studies. This event is part of the Transatlantic Partnership on Memory & Democracy.