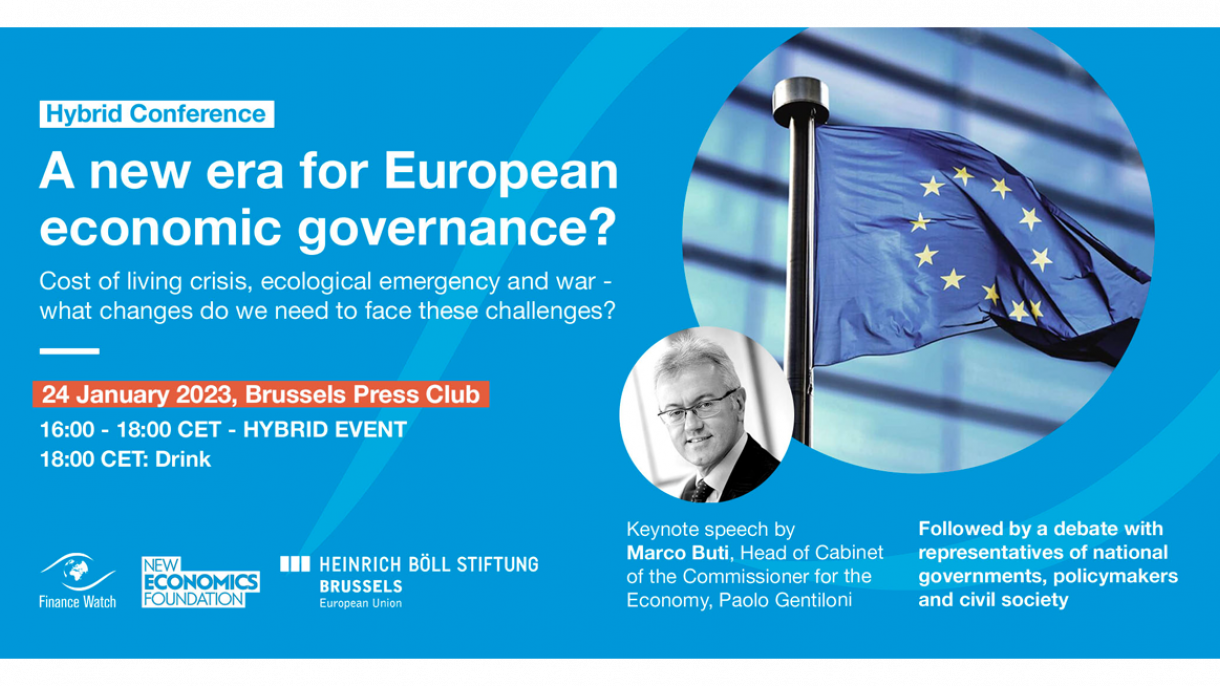 Cost of living crisis, ecological emergency and war - What changes do we need to face these challenges?

Cost of living crisis, ecological emergency and war are some of the new challenges facing Europe. How should the EU economic governance framework change to allow Europe to become stronger, more sustainable and resilient to face these challenges? Finance Watch, Heinrich-Böll-Stiftung European Union and the New Economic Foundation are hosting a conference to discuss the ongoing review of the framework.

The European Commission recently issued an orientation paper setting the direction for the review of the European economic governance framework, including the European fiscal rules. This long-awaited proposal revolves around national medium-term plans connecting country-specific debt pathways and their duration, with commitments to qualitative reforms and investments. Under the proposal, Member States would have greater ownership over debt reduction plans instead of being subject to the one-size-fits-all “1/20th” debt reduction benchmark. Other parts of the rules, such as the 3% deficit limit, remain untouched.

However, addressing Europe’s economic, environmental, and social challenges calls for reforms but also significant investment. Estimates of what is needed to bridge European funding gaps are daunting: €520 billion a year until 2030 to meet EU environmental objectives, €142 billion a year for social infrastructure such as hospitals and schools, along with €190 billion a year to stabilise the stock of public capital – such as publicly-owned roads, buildings, bridges and ports. If the private sector is expected to bridge part of these gaps, a significant share requires public intervention.

Marco Buti, Head of Cabinet of Commissioner Paolo Gentiloni, will give a keynote speech presenting the Commission’s proposals, followed by a debate between Agnès Bénassy-Quéré, Chief economist at the French Treasury, Peter Stein, Head of Unit at the Permanent Representation of the Netherlands, and Rasmus Andresen, Head of the German delegation in the Greens/EFA Group in the European Parliament. The event will be followed by a drink.