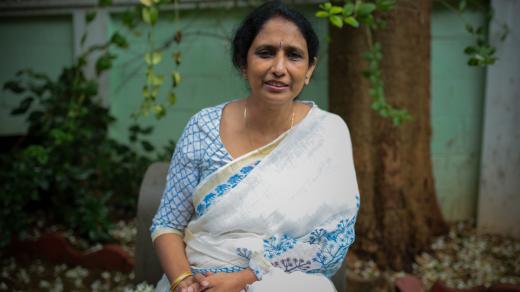 The 2020 Anne Klein Women’s Award goes to Prasanna Gettu, a human and women‛s rights activist from Chennai, India. Gettu, a criminologist by training, is a remarkable, courageous defender of human and women‛s rights and a champion of the right of women to lead lives free of violence and according to their own wishes, a life in dignity and good health. In 2001, Gettu was the founder of the International Foundation for Crime Prevention & Victim Care (PCVC) that offers hands-on support to female victims of violence in India. A special focus of Prasanna Gettu‛s work is the support of survivors of arson and acid attacks.

Barbara Unmüßig, chair of the jury and co-president of the Heinrich Böll Foundation stated, "India is one of the most misogynistic countries among the large nations of the world, and social and interpersonal violence against women and girls is common. Prasanna Gettu is unwilling to accept this, taking the side of female victims of such violence and supporting them politically as well as in very tangible ways. In 1989-1990, while serving as Minister for Youth, Women, and Families in the West Berlin state government, Anne Klein vigorously campaigned for crisis centres for women and girls – and that with considerable success. This year, the award, endowed by her and named in her honour, will be awarded in remembrance of her 70th birthday, 2 March 2020."

This will be the ninth Anne Klein Women’s Award; the prize money is 10,000 euros.

The laudatory speech will be held by Elke Büdenbender, lawyer, judge (currently on leave), wife of the Federal President of Germany, Frank-Walter Steinmeier.

The statement of the jury, along with a biographical sketch and photo of the awardee is available free of charge at https://www.boell.de/en/anne-klein-womens-award

Please register for the award ceremony using the button above. The seats in our Great Hall are limited; however, we will transfer the ceremony to other rooms and via livestream on the Internet. There is no entitlement to a seat in the Great Hall.