‘Who weaves: The gender question in the handloom industry.’ 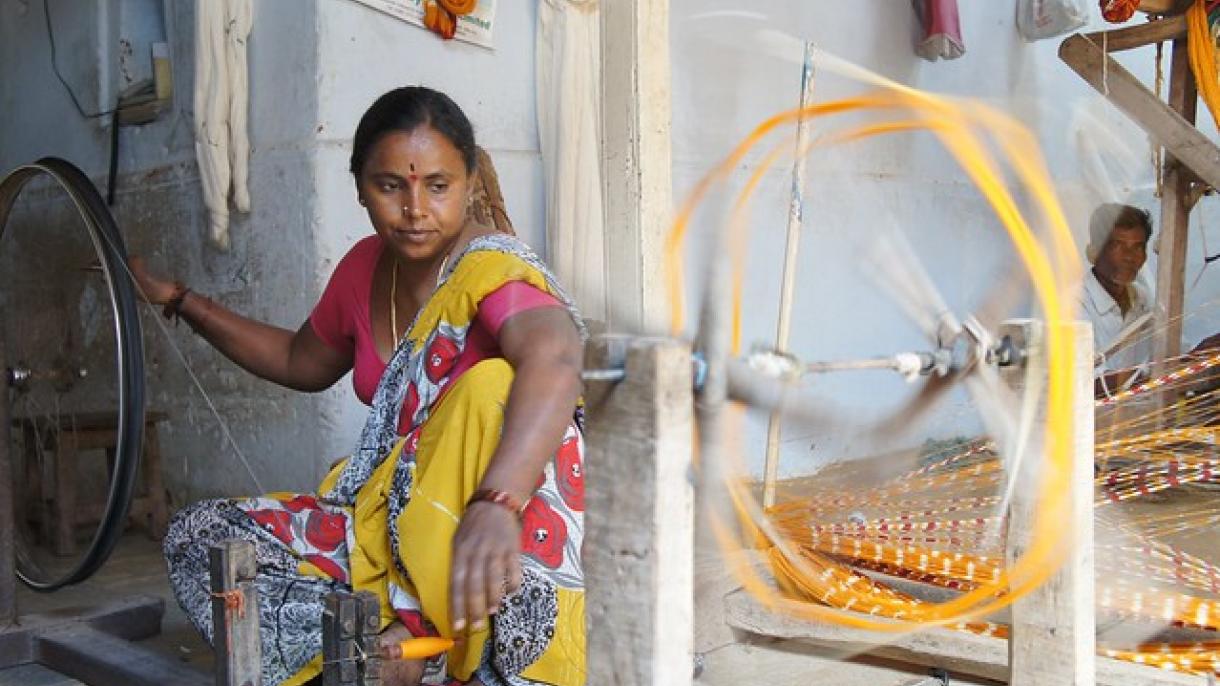 The forum attempts to understand the various issues and concerns regarding women and their work in the handloom industry while also analysing the various policies and schemes, and their impact on the women handloom workers. The effort is to understand the gender marginalisation taking place in the industry despite an extensive 77% of female adult workforce[1] in the sector as main weavers or allied workers. This gender marginalisation could be attributed to the low economic bargaining power of the women weavers as most of them are informal workers and also because of the decentralised authority, historically characterising the Indian society[2]. The discussion will also engage into experiences of successful stories of women cooperatives/associations which have succeeded in bringing the women weavers into forefront, acknowledging and appreciating their work.

The handloom sector is one of the largest and oldest industries of the country, currently the second most employment provider in the country with almost 4.3 million people directly involved in the industry. The strength of the sector lies in the fact that it involves very low capital and power, is eco-friendly and transformative in nature. The sector also encourages innovation with respect to the market requirements which provides an added advantage for the retailers and consumers (EXIM Bank, Working paper 80). The handloom industry in recent years has been gaining tremendous popularity with a number of established designers choosing handloom textiles over synthetic textiles for their products. The industry has been growing at exponential growth with exports accounting for US $360.58 ml in 2016-17. Despite this growth, the handloom sector did see a decline in active workforce and feminisation of the labour force.

As per the Third Handloom Census (2009-10), of the total adult (18 years and above) workers, 57.6% are female, of which 26,44,054 are from rural areas and 3,54,308 are from urban areas. Major gender differences with respect to the workforce are seen in north-east and other regions of the country. In north east, women constitute 99% of the total people employed in this sector whereas in other regions of the country, the female labour force constitute 56% of the total labour force.[3]  Even with such participation rates, women’s work and contribution is not adequately recognized. In the handloom sector, women have been the stabilising force during the major economic crisis, working at minimal rates at the household looms, but they continue to be victims of subjugation at work, in family as well as in society. The persistence of the handloom sector as a household enterprise entails that women are not main workers but do their work in their leisure time. As Cherry (2009) calls attention to the invisibility that happens in light of the fact that these tasks are related and mistaken for leisure, are viewed as intentional and furthermore fall outside the legal structure. Such an employment status divests these women weavers of competitive remuneration for their work, social security benefits, etc. Another reason for this employment status is also that most of the traditional handlooms are registered in the names of male members of the family with no recognition given to the female weavers or allied workers who work on them[4]. This makes it difficult for the women weavers to seek any financial support in the form of institutional credit for their work. This in return leads to financial implications and hardships for them.

With respect to gender income gap, Hazarika (2017) points out that the influence of handloom related institutional training is not significant in increasing the income of the female handloom workers. However, in his study he also indicated the role played by financial literacy, risk-averse attitude and social capital in determining the work of women in the handloom sector, success of the micro-enterprises owned by women and so on. He also discusses the existence of gender income gap among the handloom micro-entrepreneurs. As per his analysis (based on data from Assam), women earn 51% lower income than their male counterparts. While considering the differences in endowments and controlling for location specific effects, the income gap reduces from 51 percent to 29.7%.

In their paper, V.S. Teena and Nisha Sheen (2016) point out how women were found to be socially, personally and economically empowered through the cooperative societies. Their participation in the cooperatives enabled them to earn regular wages which were either monthly or weekly. It also stated how in the opinion of women they could improve their skills and knowledge through the activities of the cooperative. Enrolment into the cooperatives has also enabled them to procure raw material at cheaper rates, credit availability at lower rates of interest, profitable selling of products and so on. All this has empowered them to have a positive impact on social, dietary and health patterns among women which further affects their families as well.

However, despite these efforts, the issues with respect to women in the handloom sector are not limited to poor income and working conditions, but also psychological and physical problems which arise due to the type of occupation. As the occupation is a tradition in these communities instead of only a source of livelihood, in many places, women workers are not allowed to work on handlooms during menstruation owing to the cultural significance of the activity. Also, strenuous hours at handlooms leads to a number of health issues such as strained back, respiratory and reproductive problems, etc. Besides, many women also work for master weavers, in rented/owned sheds instead of their houses.  In such cases, the women work in substandard conditions, lack basic necessities such as toilets, clean drinking water, child care facilities and so on. This constantly exposes them to risks of sexual harassment, exploitation, violence and other types of discriminatory behaviour.

In the existence of all these issues and problems, the government since independence has tried to make the handloom sector competitive but with limited to no success. Initiatives have been taken with schemes such as Integrated Handloom development scheme (IHDS), Diversified Handloom Development Scheme (DHDS), Mill Gate price Scheme (MGPS), Revival Reform and Restructuring Packages (RRRP), and so on. However, since most of the women do not have handlooms registered in their name, they fail to benefit from any of these schemes. Non-availability of certain other documents, failing to partner with any self-help group, etc are some of the other reasons behind failure of women to have access to certain other benefits provided by various initiatives of the government.

In the light of all these facts, understanding the role of gender and policy implications for these women weavers in the current scenario, with textile sector being flooded with synthetic raw material, power looms and the pre-existing gender roles with respect to such traditional industries, is of high significance. With today’s discourse, we will try to unravel these questions in detail and further deduce certain policy recommendations or initiatives required for adequate recognition of women weavers and bring them into the mainstream workforce, which would not only help them in earning better incomes but also in accessing various socio-economic benefits through the initiatives of government as well as non-government organisations.

Note on Handloom Sector (2015), Ministry of Textile, Government of India.

Hazarika, B. (2017), Decomposition of Gender Income Gap in Rural    Informal Micro-enterprises: An Unconditional Quantile Approach in the Handloom Industry.

Premsundar B., Kannan. (2013), Women in Handloom Industry: Problems and Prospects.