Gender concerns and representation of women in general elections 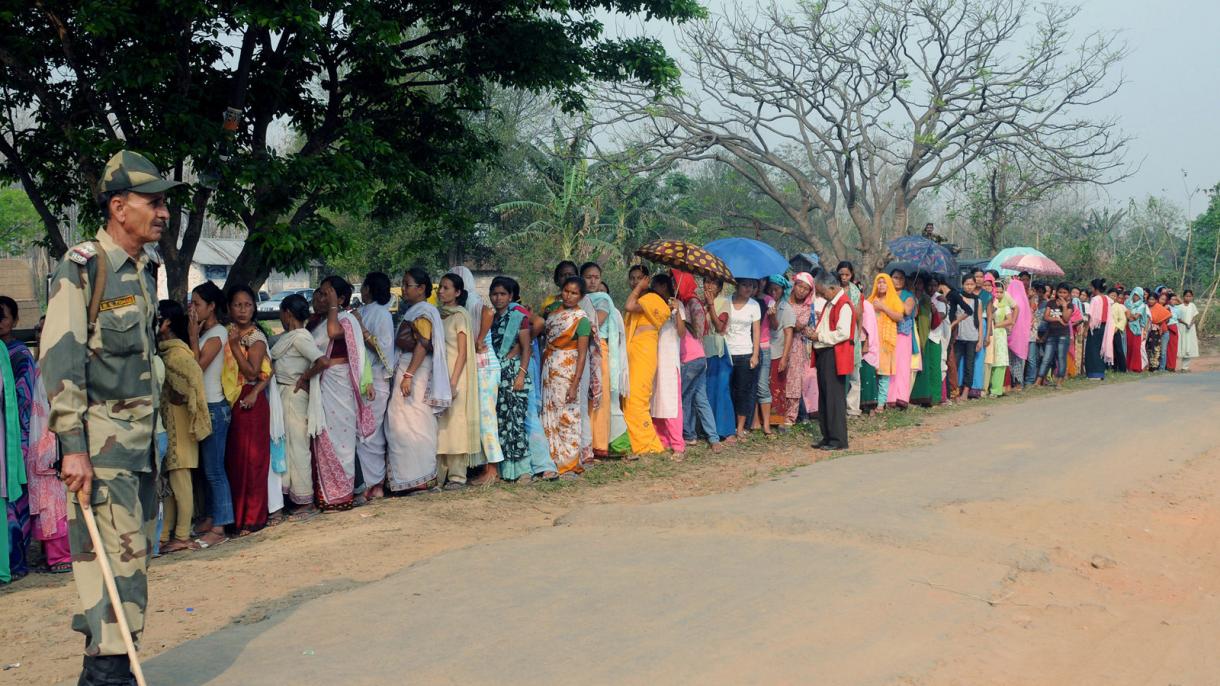 Creator: A long queue of female voters waiting for their turn to cast votes at a polling station in Vamen Vukhri Tree, Dimapur, Nagaland during the first phase of the General Election-2009 on April 16, 2009. Photo by Public.Resource.Org.

Part of the series
Gender and Economic Policy Discussion Forum 2017

An active democracy is represented by governance models and electoral processes where equality and freedom to represent are cut across gender. The 1950 Constitution of India provided for all its citizens, ‘JUSTICE’, Social, Economic and Political and ‘EQUALITY’ of Status and Opportunity. Despite this constitutional promulgation, the country has seen a male dominated political structure with multiple barriers to the entry of women encompassing socio-historic forces, social structures and policies and the gendered nature of citizenship. This imbalanced representation does not exist only in the legislative bodies at state and national level but extends to the executive wing also. As a result, women have largely failed to acquire critical mass required to introduce gender perspective in policy decision making and gender-friendly legislation in general.

The 2011 UN General Assembly resolution on women’s political participation reiterated that “women in every part of the world continue to be largely marginalised from the political sphere, often as a result of discriminatory laws, practices, attitudes and gender stereotypes, low levels of education, lack of access to health care, and the disproportionate effect of poverty on women.”[1]

Between the First Lok Sabha (1952) and the Sixteenth Lok Sabha (2014) women’s representation has increased from 4.4 per cent to 11.9 percent. Similar trend of low representation of women is also observed in the Rajya Sabha (Upper House) during the entire period of post-independence era. Women’s representation in Rajya Sabha has increased from 6.9 percent in 1952 to 11.4 percent in 2014. Again, these figures are substantially lower compared to the global average of 22.9 per cent and Asian average of 16.3 per cent of women representatives in Upper House. Considering the share of women (49.5 percent) in the total population of India, their representation in Parliament represents a skewed statistic, which is not befitting to the world’s largest democracy.

The 17th Lok Sabha elections of 2019 saw 715 women candidates contesting against 7334 males. The number however small did see some successful wins such as Smriti Irani in Amethi, Pramila Bisoi in Aska constituency, and many others. This acuteness of women in the mainstream politics is reflected in India’s current Lok Sabha women members which is 12.6% of 524 seats, much below the world average of 24.3%. In World Ranking, Rwanda stands at the forefront with 40 women representatives of 80 seats whereas India ranks at 149 with only 66 women representatives over 524 seats. The Economic Survey 2017-18 also point to low political participation of women despite their population being 49.5% in the country. It also says that factors such domestic responsibilities, prevailing cultural attitudes regarding roles of women in society and lack of support from family were among the main reasons that inhibited their entrance into the politics.

In his paper “Women’s empowerment Through Political Participation in India”, Kuldeep Fadia says that political participation is imperative for women to be in the corridors of power and have the power to negotiate better and also to influence policy decisions which have an impact on them. It is critical for their advancement and for the foundation of a gender-equal society. In current situation, women are virtually invisible in the political sphere and their under-representation in decision making reinforces their deprivation, unequal distribution of resources along with neglect of interests, needs, perspectives and priorities in policy making.

The report Towards Equality (1974), submitted by Committee on the Status of Women in India (CSWI) reveals that political parties have tended to see the women voters and citizens as appendages of males. It also refers to the term ‘Tokenism’ where a few women are involved as a representation of their rights on account of their dependent and minority status. This report emphasized on a more meaningful role of women in the structure of local administration.

Praveen Rai, in his article “Electoral participation of Women in India: Key Determinants and Barriers” tries to identify different reasons for under-representation of women in legislative bodies both at the national and state level despite a rising trend seen for women as voters and election campaigners. According to him, this female marginalisation stems mainly from political parties which discriminate not only in allocation of seats but also in party rank, file and chain of command, attributing this to the competition within the party characterise by inherent male dominance and a patriarchal mindset that excluded women from the electoral process.

Other reasons which affect the representation and participation of women in the political process include deficiency of women role models, Gender gap resources, Household responsibility, Absence from political spaces, so on and so forth. Deficiency of female role models acts as an institutional barrier to entry of women in electoral process. However, many times it is seen that a women’s win in the election doesn’t encourage more women to context in next election, thus undermining the Role Model Effect by Lori Beaman, Duflo, Rohini Pande and Petia Topalova. Adding to this, women to a greater degree than men have not accumulated the political and non-political resources necessary to reduce the information and physical costs of political participation. Equalisation in resources would greatly add to the political participation of women. This can be accentuated by unequal distribution of household work. Household work creates gendered differences which emerge from political division of labour inside the households.

In similar context, it is also seen that women with better education, employment, higher social standing or social class, and urban women, are more likely to be interested as well as more active in politics. And since, in workforce also they are likely to be less in numbers, they may be less politically active than men (Gleason,2001).

Sarah Khan(2017) emphasizes that there is more or less absence of women from political sphere including dialogues and discussions and thus are more likely to prioritize their husband’s preferences. This is supported by Artiz Prillaman (2018) who considers families as unitary actor implying that the family coordinates the political behaviour where men act as agents of political behaviour. As a result preferences get skewed in favour of Men’s interests.

Also, the blame for lack of representation doesn’t go to parties or resources only, but voters are equally responsible for under-representation of women in the electoral process. If voters think that women candidates would not make good politicians or will not be able to take strong and bold decisions for their constituencies, they will not vote for them. This was seen in a Harvard University study of local polls in West Bengal where the villagers ended up rating women candidates below male ones. (Gender bias in Indian elections, Sudipta Sarangi, Chandan K Jha)

From all these concerns and barriers arises the recommendation of providing reservation for women candidates in the Parliament ensuring a particular number of women are present in decision making and policy formulations. The first proposal for 33% reservation for women in the Parliament. The rationale for reservation in favour of women is that women have higher costs of running for office. However, the results of the study done by Mudit Kapoor and Shamika Ravi in their paper “Why So Few Women in Politics? Evidence from India” challenge this pattern of reservation policy and instead suggest that if the objective of reservation is to promote compensatory justice and safeguard interests of women, then it should be ensured that such policy is executed in areas where women are an electoral minority.

Additionally, the complicacies of gender in the politics do not end with winning elections but continue even in their tenure. In her paper “The Politics of Access: Narratives of Women MPs in the Indian Parliament”, Shirin M Rai, while interviewing the senior MPs at their homes- senior MPs have attached offices in their homes, observes that these offices blur the spatial politics. The public and private overlapped during the interview as these women went about their daily lives- answering endless phone calls, giving orders to servants, keeping people waiting for further meeting- while answering to my questions in a politically correct manner. These interviews revealed that families support women in different ways such as employing their political capital, helping with everyday housework or childcare, or through providing emotional support. They also show that in some cases the strength of patriarchal social mores delay the participation of women in the political life and even inhibits them in developing a strong public profile.

In today’s discussion, we will explore and understand the gender complications in not only the Electoral process but also the complexities of existing in this male dominated profession where despite major efforts, women have not been able to mark their presence in numbers.