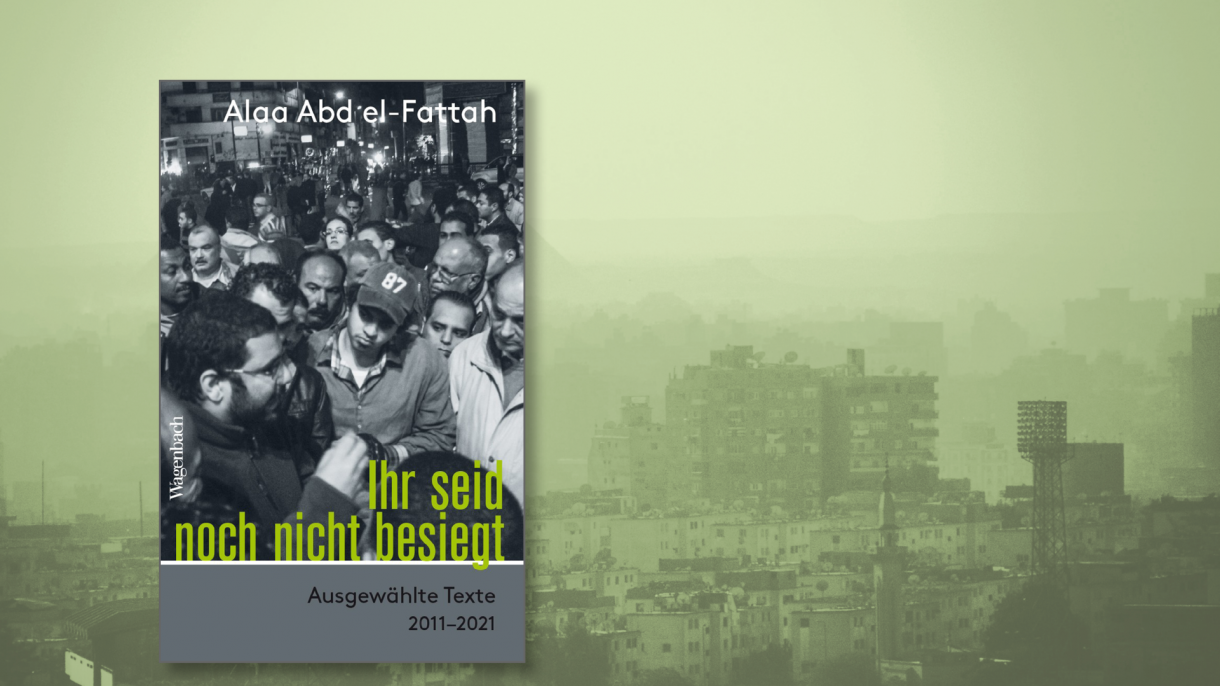 Bookcover "You are not yet defeated" on Cairo wallpaper. Creator: Wagenbach Verlag, Collage Heinrich-Böll-Stiftung. All rights reserved.

"You have not yet been defeated" by Alaa Abd El-Fattah

Alaa Abd El-Fattah, without doubt one of Egypt's most prominent political prisoners, has spent most of the past ten years in prison - under Husni Mubarak and Mohammed Mursi as well as under Abdel Fattah al-Sisi. Again jailed since 2019, he has been on hunger strike since April. Since 6 November, the start of this years UN Climate Conference in Egypt, until 12. November, he also stopped drinking water. In doing so, he put himself in a life-threatening situation in order to lend weight to his demand to be released. After a physical breakdown, he also decided to suspend his hunger strike for some time on 14 November. Despite great international solidarity from civil society actors and representatives of various governments, his release is still not in sight.

Back in 2017, Alaa Abd El-Fattah wrote from his imprisonment in the notorious Tora prison: "Unlike me, you have not yet been defeated/Ihr seid noch nicht besiegt". He was addressing all those who can continue to publicly denounce the injustice that has been happening to him and tens of thousands of others for years: The Egyptian regime suppresses debate on human rights violations by forcibly disappearing its critics, torturing and imprisoning them, and barely allowing family members to contact them.

Yet Abd El-Fattah has always found ways to share his thoughts, both personal and political, with his fellow activists. Thanks to the painstaking and dangerous work of a collective, the collected texts have now been published in German for the first time. They include essays smuggled out of prison, Abd El-Fattah's speeches during the rare court hearings and public contributions on social media.

On the occasion of the publication of the German edition of "You have not yet been defeated/Ihr seid noch nicht besiegt", the Heinrich Böll Foundation invites you to a reading of selected texts. The subsequent discussion will focus on the situation of political prisoners in Egypt and the question of how German and European foreign policy can and should react to the human rights violations in Egypt.

With a musical contribution by: Khyam Allami, Multi-instrumentalist, Berlin

A cooperation of the Heinrich-Böll-Stiftung with Verlag Klaus Wagenbach